Commute Time in Brazil (1992-2009): differences between metropolitan areas, by income levels and gender 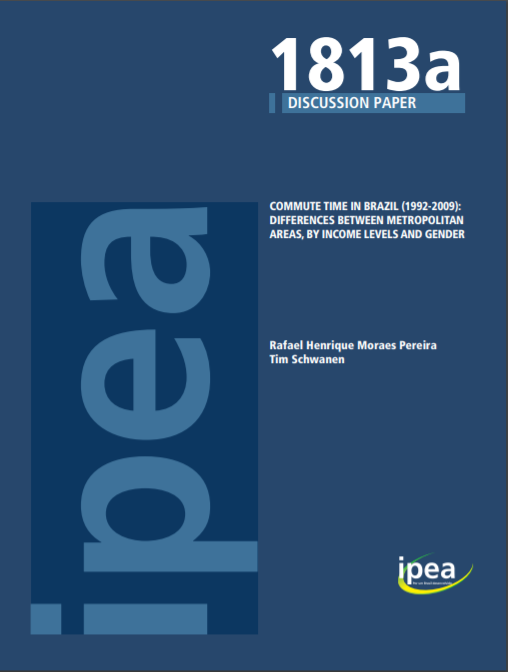 "This study analyzes trends in average commute times in Brazil between 1992 and 2009. It distinguishes between the nine largest metropolitan areas plus the Federal District of Brasília and describes how differences among these areas vary according to income levels and gender. This paper is based on the National Household Sample Survey (PNAD) carried out by the Brazilian Institute of Geography and Statistics (IBGE), a source of data hitherto little used for transportation studies in Brazil. PNAD data is not conceived strictly for transport planning but is the only large-scale survey in Brazil with annual information since 1992 on commute time at national and subnational levels (states and metropolitan areas). Five main findings are stressed. First, travel to work trips tend to be 31% longer in São Paulo and Rio de Janeiro, the two largest metropolitan areas (MAs) in the country, than the in the other MAs. Second, workers in the poorest population segment (1st income decile) spend on average 20% more time on commuting than the wealthiest decile; 19% of the former make home-towork trips longer than 1 hour against only 11% in the wealthiest group. Third, this gap in commute time between rich and poor is spatially contingent; it is large in Belo Horizonte, Curitiba and Federal District but almost nonexistent in Salvador, Recife, Fortaleza and Belem. Fourth, the data reveal worsening conditions for urban transport since 1992 as reflected in longer average commuting times. However, these worsening conditions have been more pronounced in the 1st income decile and especially the 7th-10th deciles. As a result, the overall differences across income groups have actually weakened during the period 1992-2009. Finally, the gender gap in average commuting times has been reduced considerably over the period considered with only small gaps remaining in the extreme income groups. The present study highlights that trends in average commute times in emerging economies, such as Brazil, need not follow the same trajectories as in the Global North. It also shows the importance of not focusing on national trends only; this will obscure important differences between urban regions. From a policy perspective, the paper shows the usefulness of the PNAD data for monitoring urban mobility conditions in Brazilian major MAs. Yearly variations in commuting time can among others be used to assess the effects of mass transport investments on urban transport conditions."